Cruise and Kayak the Calamian

Experience the Calamianes group of islands, home to the seafaring Tagbanua, Kagayanen and other tribespeople, by getting on the water as they do. Launched from the mother boat–a roomy motorized outrigger called a banca–sea kayaks will take us up close to native custodians of this archipelago billed as “The Last Frontier” by Jacques Cousteau — one paddle stroke at a time! This Tribal Adventures’ 9-day exploration is of the remoter and quieter corners of Coron, Busuanga and Culion, and their satellite islands which together make up the Calamianes.

We’ll be stopping to snorkel often: In addition to sea kayaks for all, Tribal Adventures will have snorkels and masks available for each person. The expedition runs between October and June. But it is usually best timed for Oct-Nov 2016 & April-May when winds are usually light, oscillating between light easterlies and westerlies, we can expect the rare privilege of exploring the traditional east of Coron Island, home to the native Tagbanua.

These are a people who attained ancestral domain (ownership) by the mid-90s of not only of the island of Coron but surrounding waters. Even the Inuit and Australian aboriginal tribal peoples had to wait longer! Gaining the respect they had longed for the Tagbanua — through the Council of Elders — have ensured the sustainability of their way of life and their beloved Island, by among others things by implementing justice. Come on a journey reassessing our own precepts about law and justice with the leader of this expedition, Greg Hutchinson, Founder of Tribal Adventure Tours, a veteran foreign correspondent and published author. He also has a legal background having been once admitted to the New South Wales Supreme Court as a solicitor. He wishes his own native peoples could have the choice to whip wayward Tagbanua politicians, as the Tagbanua elders have been known to do!

In Coron, we will penetrate the Secret Lagoon, a site so sacred the Tagbanua have a separate dialect for the area. There and elsewhere we will paddle glassy clear waters, gliding below undercut cliffs for kilometers and kilometres—losing any true sense of time as if we’re caving. And, there will be real caves we come across that we can explore. There are three in eastern and southern Coron we have recently uncovered ready to be explored! And then there are the beaches where we will pitch tents: White, soft and sandy, and usually devoid of other creatures, birds, monkeys and monitor lizards excepted! A campsite might have a towering limestone backdrop or be on a sandbar with sunrise and sunset visible from your camp bed, which comprises a camp mattress with linen sheets and a real pillow. Whichever, you’re on a true Tribal Adventure in the land and on the waters of the Tagbanua and Kagayanen. At least one Tribal Adventures’ guide on the expedition will be from the Tagbanua or Kagayanen tribe.

Pick up and transfer 1 hour by 4×4 to Palawan SandCastles, base of Tribal Adventures and jump-off point for your kayak sea safari of the remote Calamianes. Check into comfortable, native-style fan-cooled seaside pavilion with mini-plunge pool and private bathroom. Tour orientation, gear check, kayak and snorkel/mask try-out, L, D
2

Check out after breakfast, boarding loaded banca for start of sea safari. Stop near south-east Calauit and kayak through long mangrove estuary and across a bay to Calauit Reception Centre: Walking wildlife safari commences, lasting some 2 hours until lunch. Kayaking resumes, paddlers shadowed by banca Arrive at Black island by kayak (or banca). As the crew sets up camp, you can explore a cave behind the camp site which was once the scene for a Survivor series—Czech actually. Dinner on the beach under the stars. B,L,D
3

Breakfast. Snorkel while crew breaks camp. Paddle out of camp by circling the island if conditions permit. Hitch a ride on the banca for an hour or so, stopping to paddle, dropping paddle to visit idyllic sand-ringed and palm-fringed islands and snorkel their reefs. After lunch we’re back on board to scout for our next camp site: a beach on or off Popopotan would appear as remote as we can get and stay to our schedule. Dinner in camp under the stars. B,L,D
4

Paddle out of camp while crew decamps. Explore the Coral Bay-Galoc area by kayak. Late morning pick up by banca. Cruise to Lusong reef for wondrous reef snorkel. Lunch. Then it is off to what we have come to call Nemo Reef, off Culion. Try to locate the cuties! Mid-afternoon we arrive at the town of Culion, checking in to Maya Hotel. Crew resupplies expedition. Town exploration follows, opening our minds to issues surrounding leprosy, though long since gone from this which was once the world’s largest leper colony. B,L,D
5

Having charged batteries, taken breakfast and checked out of Maya Hotel, we hug the coast in our kayaks to get a true feeling for this picturesque place and its residents before finding a mangrove channel and shortcut to our next destination: Malcapuya. We check the place out before getting on the boat and crossing to Ditaytayan Island, paddling it and arriving at a camping spot. The one our guests most favour has a sunrise and sunset vantage point! B,L,D
6

Breakfast and break camp. Cruise to Coron Island where we kayak its lagoons, eventually finding a camp site, which acts as a base for us to do some personal exploration by sea kayak and snorkel. B,L,D
7

After breakfast and as the crew breaks camp, more superlative paddling awaits—kayaking undercut cliffs, penetrating caves and lagoon, and also dropping paddle at secluded beaches. With hammocks at the ready, we’re ready to intersperse some intense activity with siestas, stringing up our hammocks between palm trees, in the undercuts themselves allowing the water to lap on our sleepy bodies. As always, the boat will be close by and the crew at ready to serve lunch and merienda. Camp on another Coron Island beach. A good bye feast under the stars. B,L,D
8

Break camp after breakfast and cruise to the touristy area of Coron Island: If you wish to visit Kayangan Lake, Barracuda Lake or kayak or swim between the Twin Lagoons, this is your opportunity! Will have you at a Coron hotel like the Corto del mar mid-afternoon. 6pm pick up for Maquinit hot spring bath and barbecue. Back in your hotel by 9pm. B,L,D
9

Transfer out to airport after breakfast and hotel check out. 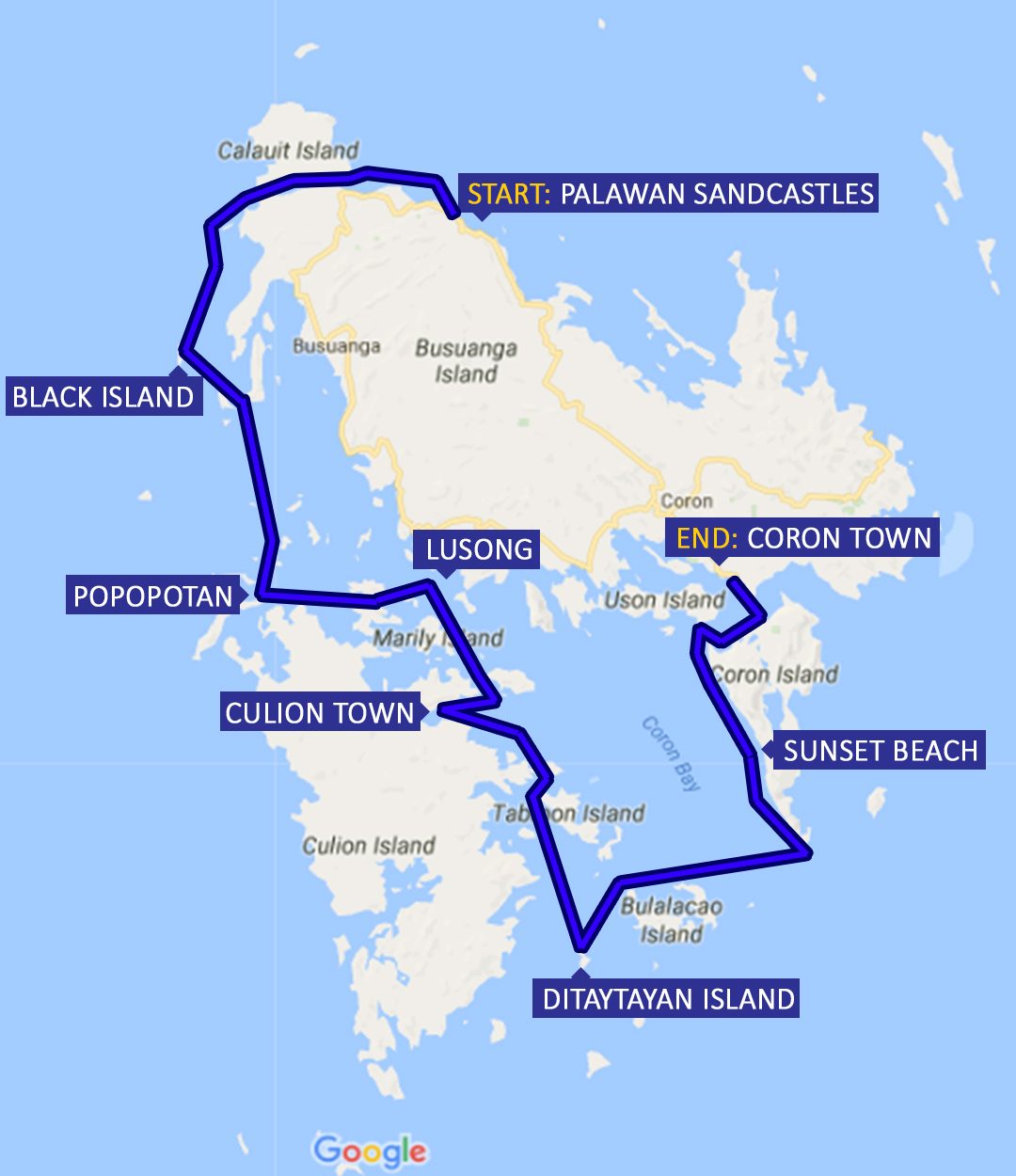