Discover the best of Northern Busuanga, a raw and beautiful corner of sparsely populated Palawan, that is off the tourist track.

Three adventure-filled days have you paddling mangrove estuaries, snorkeling over coral and dugong, dropping paddle at idyllic palm-fringing islands, two of which will be your camp sites for the two nights out under the stars in a makeshift, serviced tented camp.

Culture is at the core of the expedition, with a Tagbanua elder having two hats — one as resource person, the other as camp manager and assistant kayak guide.

He’s joined by a lead guide, a cook and boat crew — all local fun-loving Filipinos — who will make you feel at home, comfortable and well-fed with three meals a day, two meriendas and a sundowner.

We take a walk through a sanctuary occupying a huge 3,700 hectare island where giraffes and zebra?

Why? The park does have the only large herd of endangered Calamian deer. But, more to the point is the story of its origin — the greed and absolute power of the dictator who sent the inhabitants of Calauit Island packing and took over the island for a safari plaything. He and a crony business associate did it because they could!

But the story takes a turn, and the latest is that displaced Tagbanua tribal claimants re-settling on the shore of Calauit have set up a business that lets visitors interact with dugong. Before we had a 20% chance at best of seeing a dugong let alone getting in the water and snorkelling with one. Now its over 90%. Why? You can find out from the Tagbanua guide yourself, or Sinok.

Campsites on this expedition are typically at Black Island and Dibuyuyan. Black Island is limestone like Coron and Sangat, but it’s geological structure is more solid, the cliff faces of the island solid like granite. There’s a wreck of a boat close to shore; there’s pretty coral to snorkel over and there’s a wonderful wide beach that’s a pleasure to set up tent on. And also you’ll be escorted into a cave with an underground pool and stream: A dip is always in order. Like Coron, Black Island is Indigenous-owned. Dibuyuyan, on the other hand, is privately-controlled and rarely gets tourists. It is fringed with coconut palms, has an awesome reef: Spot the black tip reef sharks and the giant groupers!

The itinerary of the Northern Busuanga Explorer is not set in stone: wind direction and strength makes for changes, often sudden. But which ever direction we go there’s always more and varied places to explore, and local people untouched by tourism to connect with. That’s the appeal with a genuine exploratory tour, especially of a rarely-visited, remote corner of the Palawan archipelago.

The day-to-day itinerary featured has the expedition starting in Maricaban Bay. Should weather conditions be conducive to starting in expedition base SandCastles it will, avoiding land transport for those commencing from or staying at SandCastles.

And, if you’re just one, two or three persons and our catamaran is available we can operate the same general itinerary and have you live aboard the cat instead. Email on tours@tribaladventures.com if that prospect whets your appetite. There’s no extra cost, so it’s extraordinary value. (If three persons, two would need to share a double bed in a cabin; the third person would have a small single cabin).

8am pick-up from airport or Coron town. Drive 45 minutes to Decalachao to start paddle through mangroves, your support banca following with kayaks and camping gear aboard. Paddle continues into Maricaban Bay, boat shadowing and cook aboard preparing merienda (snacks) and lunch, which will be taken on a pretty beach on one of many idyllic tropical islands. In the afternoon, paddlers may hitch or paddle on past lovely islands, ending up at Dibuyuyan Island, a great place to snorkel and our camp site for the night. Camping is at "comfy" standard--large tents, thermarest style mattresses, sheets, pillows, porta loo and solar bag showers.
2

Break camp. Breakfast, boarding banca for New Quezon, for start of paddle through mangroves that separate Busuanga Island and Calauit Island. You'll pass by an island inhabited by African animals--tell us if you want to stop and visit this strange legacy of a dictator! Paddling on, you pass limestone islets, pretty beaches and finally Black Island, one of the three big limestone islands. With an extensive cave, beautiful coral reefs, it's a great place to explore and to stay for the night.
3

Break camp. Breakfast. Boat ride with kayaks back to near Calauit Island where you will search for dugong and snorkel with them before paddling along the northeast coast of Busuanga Island, dropping paddle at pristine beaches and fishing communities. We get on board and get dropped off to paddle the Midpid Islands, finishing our paddle at Tribal Adventures expedition base SandCastles. Shower. Transfer out to Coron town (Or stay at SandCastles at a discounted price should you choose, transfer out included in expedition package price). 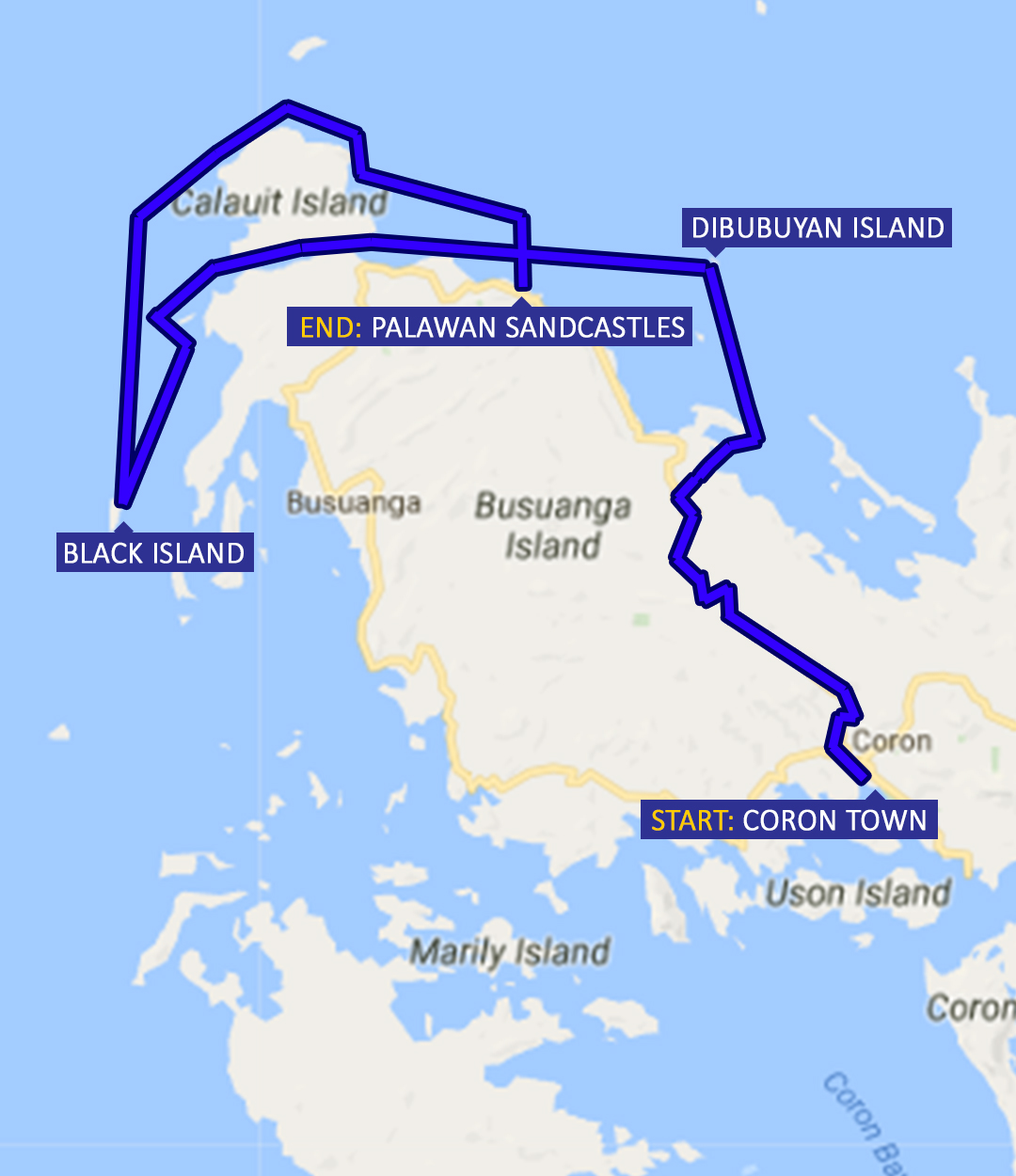 I just wanted to report that we had a wonderful day yesterday! Lerma, Vida, and the guys were all so fantastic, we got very lucky with the weather, and the food was great.  We are all really looking forward to the  excursion starting tomorrow!