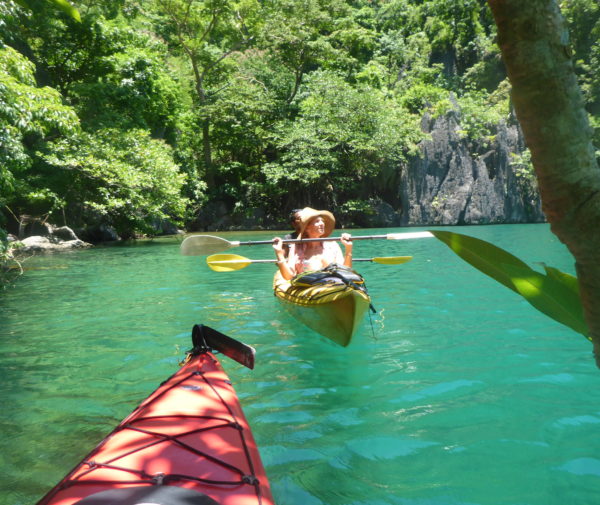 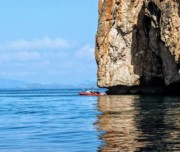 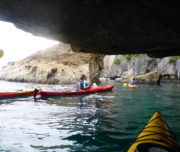 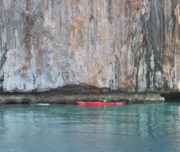 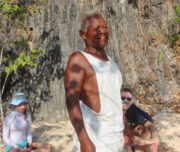 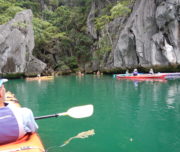 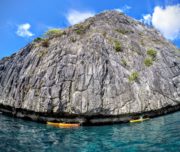 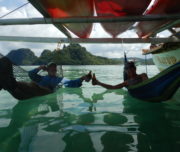 Discover one paddle stroke at a time the majesty and drama of Coron’s undercut cliff timetunnels before entering the Secret Lagoon, a sacred place with its own language demanding silence on pain of punishment.

At the intersection of limestone karst topography and indigenous culture, discover by paddling a genuine sea kayak one paddle stroke at a time the majesty and drama of Coron’s undercut cliff timetunnels before entering the Secret Lagoon, a sacred place with its own language demanding silence on pain of punishment.

Launched from the mother outrigger banca, the kayak trip hugging the undercuts takes 3-5 hours, a highlight being bamboo poles placed precariously aiding the harvest of birds’ nests as high as 200 metres from caves in the sheer limestone cliffs above. Paddlers also do a circuit of the green lagoon seen from Reden’s lookout, an opportunity to see how seaweed is grown and harvested. Gliding again en route to the Secret Lagoon beneath the heavily-undercut cliffs paddlers lose all sense of time, like being in a cave. Sightings of cormorants, kingfishers, sea eagles are common. Phosphorescence abounds as do scuttling crabs. When entering the Secret Lagoon paddlers had already digested the stories of punishment, starting with an elder and elected official who cut trees for profit and was whipped, ending with an account passed on by Willie, an elder at the entrance of the green lagoon – the one seen from Reden’s lookout — about punishment being dished out for being noisy! Silence prevails.

There’s no better way of connecting with the seafaring Tagbanua who themselves paddle to get around their virtually impenetrable island than by kayaking. Not only is paddling a compatible activity culturally it maximizes the experience that comes with accessing some of the most significant portions of Coron Island. Kayaks also afford a ready way to connect with both individual paddlers and kayakers as a group.

Paddlers launch for their 4-hour paddle to the Secret Lagoon from their motorised outrigger support boat that makes the 2-hour scenic cruise from Coron town at 9am, the exact departure time, however, dependent upon the expected tide level at the start of the kayak paddle proper.

Fully briefed, paddlers ideally depart on a receding tide from near Callis Point to kayak some 15 kms to the Secret Lagoon, passing under undercut cliffs, imitating the experience of caving when the sense of time is lost. The passage through the undercuts is punctuated by the site of bamboo poles attached precariously to the towering limestone cliffs. The poles help Tagbanua access their birds’ nests. Also on the itinerary is a circuit of the green lagoon and an examination of the seaweed farms, dropping paddle at a couple of beaches and viewing eagles, cormorants, kingfishers, crabs. Finally a slit in the limestone coast allows passage into the Secret Lagoon, a body of water of intense green and blue hues. On its limestone walls are a species of slipper orchid said to be found nowhere else in the world. So important to the Tagbanua is their lagoon it has a distinct language. Those who don’t know it must shut up on pain of punishment. The lagoon is tiny by Coron standards, but paddlers have been known to be mesmerized after enduring the tidal drum beat of the waves pounding in the undercuts, such that many hours can elapse. Tribal Adventures will hope to limit the experience to 30 minutes, making the total paddling time for the east Coron paddle to the Secret Lagoon to 3 ½ hours.

After transitioning from cormorants to kingfishers, from pulsating sea to tranquil waters, you’ll arrive at the Secret Lagoon and listen to its Silence.

Kayak out of the lagoon to the waiting banca and cruise back 2 hours to Coron town. Van pick up will have you back in your Coron hotel by 6 pm.

The timetunnels sea kayak day trip runs from April to October when winds are benign or from the west, the so-called “habagat”. It’s as much a celebration of indigenous culture as of a dramatic, limestone karst landscape. It is in fact a tour at the intersection of an extraordinary seafaring tribal culture and an amazing topography, which with out the other would be immensely diminished.

Those interested in learning more about the intersection of tribal culture and landscape, you may find out more on the tribaladventures.com blog, a reference to which follows: 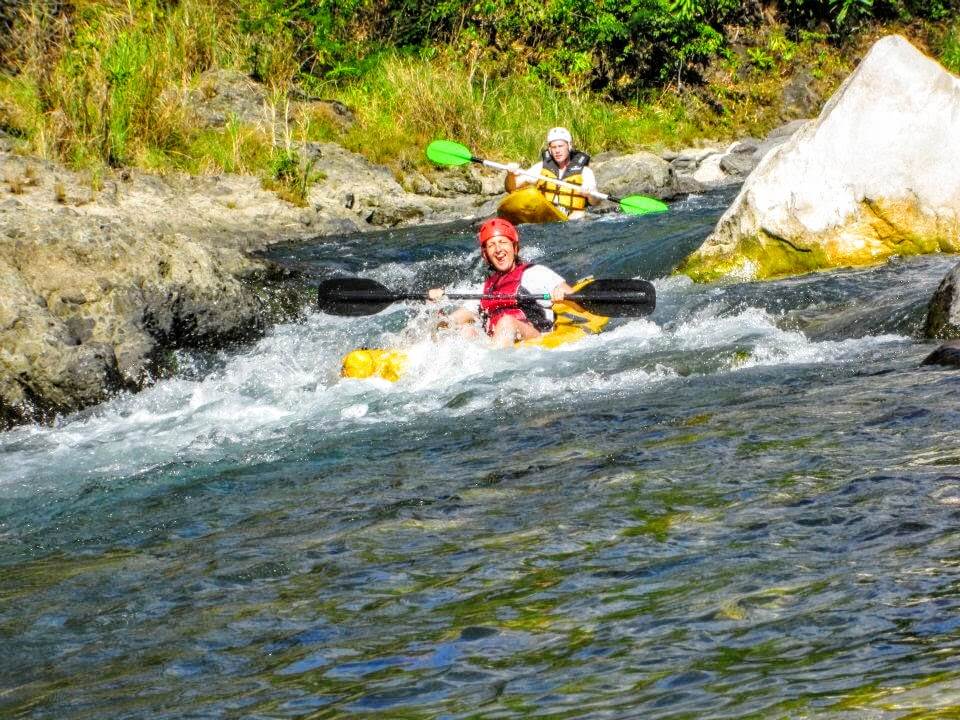 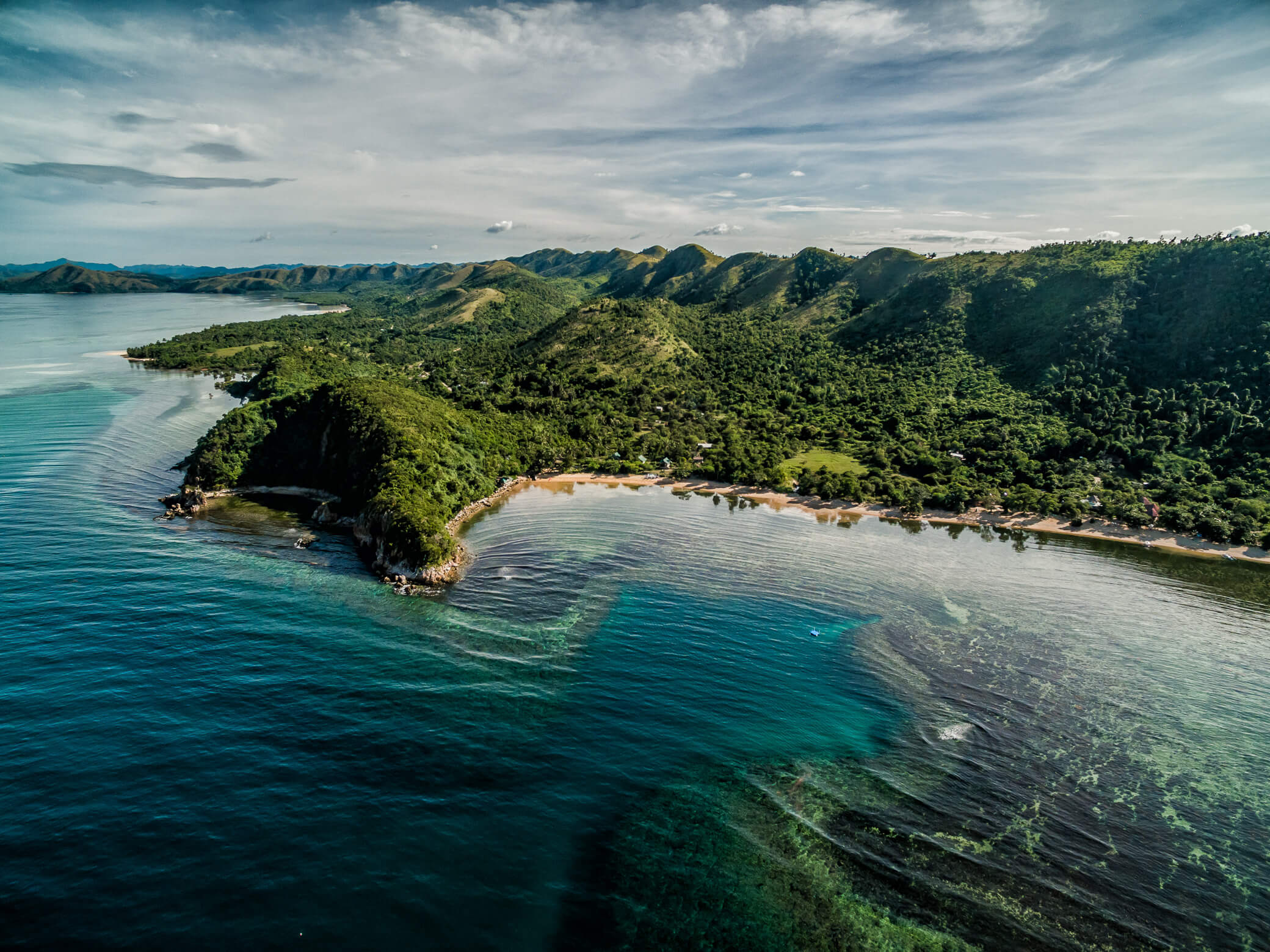 A trip into the wilds of Northern Busuanga to find Dugong, visit giraffe at Calauit Wildlife Sanctuary, explore an island cave, and paddle through a winding mangrove estuary. Plus, much much more 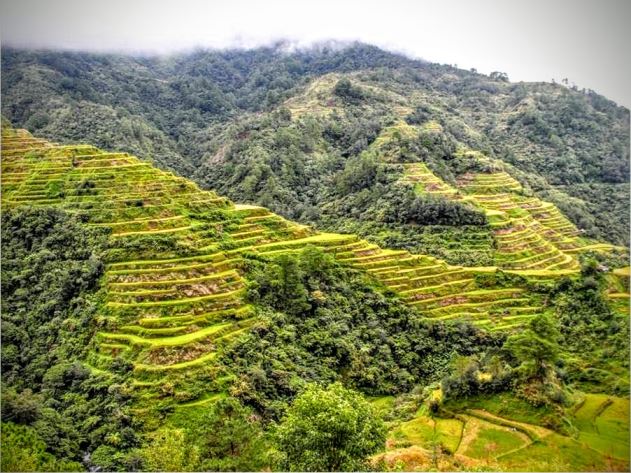 By 4x4 & on foot discover how a people turn mountains into dramatic rice terraces and human bodies into works of art. Gasp at the spectacular Rice Terraces, meet tattooist Whang Od, age 100+, savour French chef Aklay's flavours, in a feast for the senses. You want to wear a souvenir tattoo?
7 days
Cordillera, Northern Luzon
view tour